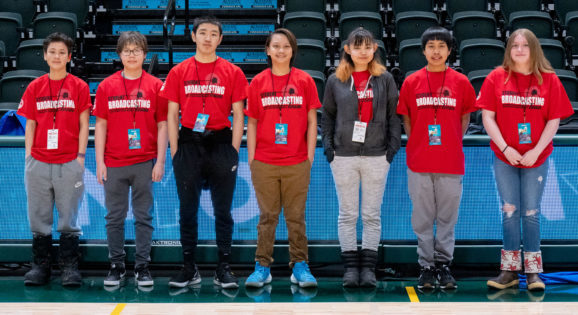 Students on Bering Straits School District’s student broadcasting team live-streamed NYO Games 2022 so viewers from around the state could catch the event.

Since 2010, a group of students has traveled across Alaska every year to be an integral part of Native Youth Olympic (NYO) Games — but they’re not athletes. Instead of participating in events like the Wrist Carry or the Alaskan High Kick, these students capture all three days of the Games on video.

The student broadcast team from Bering Strait School District (BSSD) comes to NYO equipped with iPads, tripods, headsets, and a mission: to broadcast NYO Games online so families back home can watch all the action.

“I feel like we have this big responsibility — and it’s fun to do,” said tenth-grader Kaylea Eller, who traveled to Anchorage with the broadcast team this year. “I saw we had 104 live viewers at one point, which is crazy. That was when I really realized how big this was.”

Bringing the State Together

While NYO draws students all over the state to compete in traditional Native games, as well as spectators who watch the games in person, oftentimes the families of athletes can’t make the trip to Anchorage for the yearly event. Thanks to BSSD’s student broadcast team, though, family members and others at home can tune in to a live feed of every NYO event online, at the BSSD website.

The group got its start when athletic directors at BSSD schools put out a request for anyone who might be interested in filming school sports. BSSD serves about 1,800 students spread over roughly 80,000 square miles — an area that stretches north to south from Shishmaref to Stebbins, and east to west from Gambell to Unalakleet.

“Livestreaming sports has been a big thing at BSSD for many, many years because of the lack of parents being able to travel to see their kids,” explained Jennifer Eller, BSSD educational technology coordinator. BSSD students used iPads and a SlingStudio to broadcast up to four camera angles, catching all the action at NYO Games.

To solve the problem, the district invited students from throughout BSSD who had an interest in filming, videomaking, and other related topics to join the student broadcast team. Students began capturing sporting events throughout the BSSD service area with iPads and a SlingStudio Hub, a device that enables the team to live stream up to four camera angles at one time.

That means the audience at the Alaska Airlines Center, where NYO takes place, can look up at the Jumbotron and watch events taking place across the gym, which might otherwise be out of view. More importantly, though, NYO fans who can’t attend the games in person can tune in to the BSSD YouTube live feed and watch what’s happening on the gym floor from four different perspectives.

“Livestreaming NYO is great exposure for our students because we have some kids who aren’t athletic or don’t want to participate in a sport — but by doing the video, they still get exposure to NYO and learn what it’s about,” said Patty Vink, an educational technology facilitator for BBSD. The seven students on the broadcast team this year all come with a variety of experiences. For instance, seventh-grader Nathan Vink films himself doing song covers on his guitar for TikTok; Kaylea Eller used to have a YouTube channel, and she’s interested in becoming a video editor someday.

While in Anchorage for NYO, the BSSD students got the opportunity to tour the KTUU television studios, too.

“It’s very exciting for the kids to see all the different facets of journalism and digital marketing,” Jennifer said. “I feel like the students now have different ideas of what they want to do professionally someday.”

With partners like BSSD, NYO can extend its reach statewide so even individuals who can’t be at the event can still celebrate and learn about the history of traditional games. Thanks to BSSD for bringing the games to families across Alaska, this year and in years to come!

Did you miss this NYO 2022? You can watch a recap of NYO Games 2022 here, or learn about NYO history and competitions online. Visit BSSD’s website here.

You can read this article online on the Cook Inlet Tribal Council’s website at https://citci.org/2022/04/live...