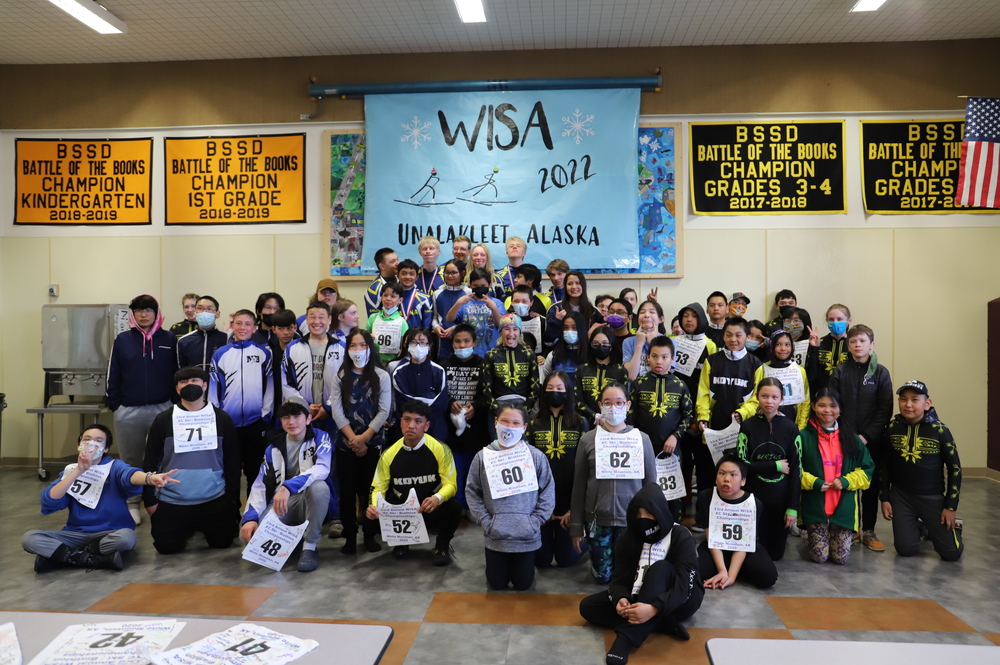 How important is the number 44?

To all the Western Alaska skiers and biathletes who have participated in regional race competitions over the years– very important!

Although it may come with an asterisk, the 44th Annual Bering Strait Ski and Biathlon Championships took place in Unalakleet from March 17-19. Skiers from Brevig Mission, Koyuk, Wales, and White Mountain joined the host team, and 35 athletes participated.

In 1978, Alaska Cross Country Ski Hall of Famer John Miles organized the first BSSD Ski and Biathlon Championships in White Mountain. Since then, scores of Bering Strait School District students have participated in an event that was continued for decades without interruption.

But, in March of 2020, travel was shut down in response to the ensuing COVID virus pandemic just after racers completed the 42nd annual event in White Mountain. That meant the 2021 rural ski and biathlon races could not happen in person.

“Our (BSSD’s) flexibility, but also our determination is why we didn’t just throw our hands up in the air and give up on it,” said the 2022 BSSD Championships Race Director and Unalakleet Coach Matt Roesch when asked how the district kept the Championships an annual event despite the travel restrictions of 2021.

Like so many other facets of life during the two-year epidemic, ski racing in rural Alaska was forced to adapt. According to Roesch, former BSSD Athletic Director Brendan Ellis worked to ensure that the pandemic did not break the string of consecutive years of racing in Western Alaska. Ellis‘s solution was to set up a virtual 43rd Annual BSSD meet.

“We had a (virtual) ski race and a marksmanship competition,” said Roesch. “We weren’t racing for times, and we weren’t comparing any racers. It was just about keeping the tradition of skiing in the BSSD alive and well.”

The 44th Annual BSSD Ski and Biathlon Championships started on Thursday with mass start skate ski races. High schoolers completed four laps around the 1.6-kilometer First Hill loop for a total of 6.4-kilometers. The top three high school boys finishers were all freshmen. Unalakleet’s Wassaq Nanouk Jones won the gold medal and posted the fastest high school time of the day by finishing in 22 minutes, 59 seconds. The silver and bronze medals were earned by Jadyn Barr of White Mountain in a time of 26:14 and Keane Wilson of Unalakleet in a time of 27:49, respectively.

The junior high racers completed three laps for a total of 4.8-kilometers. Eighth-grader Ayuu Roesch of Unalakleet earned the junior high girls gold medal in the skate ski race by completing the course in 17:44. She posted the fasted junior high time of the day and set a new course record for junior high athletes. Unalakleet eighth-grader Ourea Busk earned the silver medal in 18:33. The bronze medal went to White Mountain seventh-grader Lana Ashenfelter with a time of 22:24.

Unalakleet eighth-grader Trevin Soderstrom took the gold medal in the junior high boys ski race with a time of 18:08. Keanan Barr, an eighth-grader from White Mountain, and Ezra Jack, a fifth-grader from Unalakleet, followed Soderstrom across the finish line to claim the silver and bronze medals. The pair finished at 20:36 and 23:52, respectively.

On Friday, all athletes participated in a 10-shot, 4.8-kilometer biathlon race. Again, gold medalists for the biathlon were Nanouk Jones, Busk, Roesch, and Soderstrom. The silver and bronze medalists were the same as the ski race in each division.

The gold medal foursome from Unalakleet also captured the Skimeister Trophies awarded to the top athletes from each division. In addition, Unalakleet earned team awards in the high school boys, junior high girls, and junior high boys divisions. Unfortunately, no high school had enough girls to form a team.

Thursday morning’s marksmanship competition served as a practice for the biathlon. Gold-medalist Violet Jack, an eighth-grader from Unalakleet, established the top result for any division. By not missing a single target, she netted the highest score possible. Former BSSD champion and perennial BSSD Championships official Paul Lincoln, of Anchorage but formerly of White Mountain, said Jack’s perfect score has only happened a few times in all the years he has been helping with the race. McKenna Smith, a fifth-grader from White Mountain, and Ashenfelter were the junior high silver and bronze medalists.

It was a clean sweep for Koyuk in the high school boys division of the marksmanship competition, with ninth-graders Nathaniel McDonald and Eric Charles and junior Gavin Douglas talking home gold, silver, and bronze medals.

Four athletes hit all their shots during Friday’s biathlon competition despite cold and windy conditions. As a result, they earned “I shot clean at the BSSD” medals. The list included Violet Jack, Ezra Jack and Isabella Eller of Unalakleet, and Ida Sereadlook of Wales.

The coveted Sportsmanship Trophy went to the team from Wales.

In a post-race phone interview, Miles said he was pleased that the Bering Strait School District Ski and Biathlon Championships were still taking place. He mentioned there were so many skiers in the early days that races were held on different weekends for high schoolers and middle schoolers.

Long-time ski supporter and range safety officer Wes Jones of Unalakleet witnessed a funny moment at his assigned shooting lane. He said that a junior high girl hit all her shots, turned around, and said, “all that seal hunting sure pays off.”